War rooms and Command centres come to rescue in times of a crisis or a pandemic. War room or Command Centre is a physical place responsible for operating and analysing information at a centralised level and then sending out the processed information to the ones in need. Such war rooms have frequently updating verified information and resources. Let us dive into some ULBs which have implemented the war room strategy and now become a ‘Model’ for the nation.

Under the gutsy leader of Mumbai’s municipal commissioner Mr. Iqbal Singh Chahal bolstered by politicians, a decentralised approach was adopted to fight the pandemic with a group of dedicated experts in order to ensure a quick response service. A war room was set up in each of the 24 wards of the city. Each war room was a control centre equipped with 30 telephone lines, 10 telephone operators, 10 doctors with medical support staff and 10 ambulances. A doctors’ team was set up by inviting doctors and medical staff (especially fresh graduates from across the state) and providing them a respectable stipend of Rs. 50,000 per month along with an accommodation within walking distance from the war room. In order to avoid overburdening of the staff, war rooms functioned 24x7 in three shifts instead of the conventional two shifts. 800 makeshift ambulances were hired in form of refurbished SUVs with glass partition to ensure driver’s safety. Uber assisted the city in tracking and managing these ambulances to create a reliable tech-savvy system.

A big step was taken to cut down panic amongst the patients by handing over the Covid-19 test results to the BMC instead of the patients directly. The BMC then segregated the reports ward wise and shared the results with war rooms by 6AM. The war rooms would study the reports and share them with the patients by 8AM. Doctors and medical staff eventually connected with the patients to know their health and symptoms, examine their condition and then advise a plan of action. In case the patient requires hospitalisation, the ward teams obtain the information from dashboards and then upon re-confirmation from the hospital on the availability of beds, transfer the patients to the hospital. 10 such dashboards regarding beds availability, oxygen supply, etc. had been developed for each ward, thus totalling 240 dashboards for the city. A dashboard for last rituals was also set up which updated information about Mumbai’s 47 crematoriums. Families could book slots for cremation to avoid long queues.

In Ernakulam, a Covid-19 war room was setup back in May, 2020 and the importance grew manifold during the second wave. The dedicated war room was a mix of centralised and decentralised approach to cater to patients at district level based on their need and condition. The facility comprised of various sections such as surveillance, oxygen supply monitoring, teleconsultations, hospital beds availability and shifting facility, all owing to technology and efficiency of grassroot health systems in the district.

Once a positive tested patient has informed the local health care worker in the area, the designated medical officer for the area arranges for teleconsultations, whenever required. If the patient is not critical, they are kept under observation in home isolation. If the patient requires hospital care, the war room is contacted to get the details on the available hospital beds based on the requirement of the patient. The shifting facility then reconfirms with the hospital on the availability and proceeds with the shifting of the patient.

The vicious second wave ravaged the state of Tamil Nadu as well and the state came up with its centralised Covid-19 War room accessible on 104 helplines and social media. The publicly accessible platform is directed to a common portal where they enter the information of the patients and the war room then assigns a doctor to the case. This war room focused primarily on bed hunting and oxygen demand of the patients. The war room was running by the principle of triaging with a team of around 30 doctors working along with other departments. The doctors talked to the relative/family of the patients to get a brief about the patient’s condition and then based on the vitals (oxygen levels and CT value), recommended the course of action as to whether the patient requires home isolation or hospitalisation. The doctors then passed over the details and demands of the family (related to private or government hospitals, etc.) to the bed management team that then analysed the availability and got back to the patients within a record time of 10-15 minutes. The war room also implemented a code red protocol which was triggered when a very serious patient needed a hospital bed. In such a case, the hospital was obliged to make the bed available and could not refuse to do so.

A team was also responsible for filtering requests on social media and assuring the panicked relatives of the assistance that they would be receiving from the war room. The social media requests were also channelized the same way as the request on helpline number. In spite of the efforts, misinformation or half information remains a hurdle for the war room teams to reach out to the patients in the earliest time possible.

The Covid-19 war rooms setup during this pandemic have undoubtedly helped in fighting the pandemic. Many lessons can be learnt and adopted in the day-to-day functioning of the nation.

During the pandemic, the power of volunteering and participation of citizens was evident. The scale of their work was also large enough with various communities onboarding 15,000+ volunteers across the entire nation. This power can be realised and included in the entire system of disaster management. The participation gives a sense of responsibility to the citizens and also increases the number of helping hands. 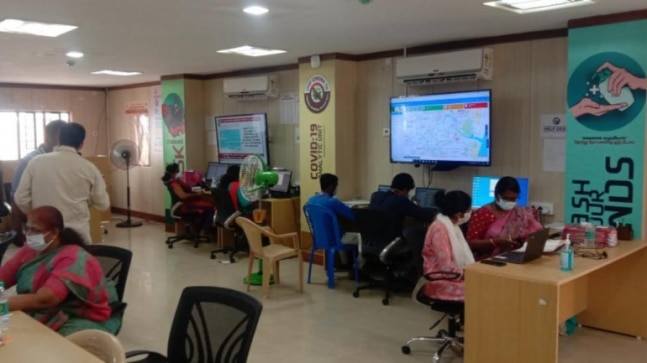 In the midst of a vicious second wave of Covid-19, the Tamil Nadu government established the 'Covid war room' for people who were struggling to find beds with oxygen and intensive care units (ICUs) on time.